Mary Frances & Andy :: An Elegant Southern Affair With a Twist

We always love a good story. Mary Frances and Andy planned an elaborate destination wedding in Charleston at Magnolia Plantation…the only complication was a pesky hurricane named Hanna. If you live on the east coast, you HAVE a hurricane story. This sweet couple has a doozy. This is a wedding from 2008 but we just could not resist….

A chance meeting at a mutual friend’s wedding in October 2005 turned into something much greater than either Mary Frances or Andy had expected! At the time the couple met and started dating long distance, during their respective last years of graduate school, Mary Frances had already accepted a job with a law firm in Charlotte, North Carolina. Andy was in the process of applying for residency positions and offered to spend his first year of residency in Charlotte so that the couple could live and grow in the same city. All of this after only three months of dating! As Andy’s first year of residency was winding down, it became clear that the couple didn’t want to separate and Mary Frances made the choice to follow Andy to Charlottesville so the couple could once again be together. After a few stressful months of job searching, Mary Frances was offered a position at the UVA Health System and Andy took her to dinner to celebrate, and unbeknownst to her, propose!

Being from opposite ends of North Carolina, the couple realized that all of their wedding guests would have to travel, so they decided to have the wedding in Charleston, a place where everyone would enjoy. Mary Frances grew up going to Charleston for family vacations and her mother lives in Mount Pleasant, so it only seemed fitting to have the wedding in one of the couple’s favorite cities with a romantic plantation theme.

A unique theme in this wedding was the element of surprise. The Monday before the wedding, meteorologists across the country were forecasting that Hurricane Hanna was going to make landfall on Saturday, September 6th directly over Charleston as a Category 4 hurricane. Surprise! Hanna was coming to the wedding too.

This posed significant problems as the wedding was outdoors and the officials were predicting a mandatory evacuation. At this point every vendor was calling the bride-to-be to “touch base” and determine a course of action in the event that the City of Charleston was evacuated. Thankfully Duvall Catering & Event Design was there to help. Duvall handled all the rentals, catering, and design features, but that didn’t stop the phone from ringing with inquiries of whether “Mary Frances had seen the weather forecast.” The stress of the last minute details, coupled with the looming possibility that the wedding was going to have to be cancelled, tested the couple’s ability to remain calm.

With Andy’s demanding residency schedule, the possibilities were limited for time off so they were determined to make it work. Deciding that they were going to get married “Come Hell or High Water,” they stayed the course and continued working through the to-do list, while their families set up their very own storm tracking center, complete with hourly updates from the bride’s very optimistic father. Everyone knew that only time would tell and everyone was there to offer their own interpretation of what the weather would do, as many of the locals had been down this path many times. As the day drew near, the forecasts changed hourly and eventually the hurricane was downgraded to a tropical storm set to make landfall on Friday. Relief was accompanied by the worry of what would come of the Rehearsal Dinner and whether the outdoor location that the couple had chosen at the Magnolia Plantation & Gardens would be dry and in any kind of shape to host a wedding after the storm had hit. Ultimately, the Rehearsal Dinner, which was planned to be held at the Harbor Club, was cancelled as businesses shut down across the city to ensure that their employees were safe at home when the storm hit. That didn’t stop this determined couple.

With the help of family and friends and a very generous staff at the Hampton Inn in Mount Pleasant where many of the guests were staying, an impromptu “hurricane party” rehearsal dinner was held in the lobby of the hotel, complete with Mama Brown’s barbecue, bed sheet linens and all of the guests decked out in their cocktail attire! Everything was set to go on as planned at the wedding site for the next day; however, it was unclear whether the plantation would be ready after the significant rainfall on Friday.

On Saturday morning, everyone awoke to a bright, beautiful sunshine ready to dry up all the rain and crews began very early cleaning up the plantation and setting up the tent for the reception. After the stress and worry, the show would go on as planned! Mary Frances spent the day at her mother’s home with her bridal party and a team of hair and makeup artists to get the girls ready for the ceremony. During the preparations, each of the ladies present, including the artists and her photographer, Leigh Webber, signed the bride’s shoes with well wishes of luck and love for the big day. This was a spin on a Turkish wedding tradition that the bride came across in planning, which held that all of the bride’s single friends sign the bride’s shoes and at the end of the night the last name remaining would be the next to marry. Being one of the last to marry, the bride loved the idea of having all of her ladies with her as she took the big walk down the aisle and had all of them sign, both married and single.

Mary Frances and Andy wanted their guests to enjoy themselves for the special day and to that end, they were tight lipped about what surprises the event would entail, even to some of their closest family members. In fact, as Mary Frances’ father was preparing to walk her down the aisle, he was quite surprised as a traditional photo booth that would serve as the guest book wheeled by! Under the tent everyone danced the night way to the band TenSpot and enjoyed the photo booth. Guests were encouraged to write messages to the couple on the photos taken, to create a fun “guest book”. All of the guests had a blast in the photo booth, including the two year old flower girl who not only got in the booth by herself and created four different poses, but who also signed the book in her own scrabble-no doubt wishes of love for the newlywed couple. The bride’s grandmother, also a Mary Frances, made several appearances throughout the guestbook, often times with new friends made during the reception, as she would get in and refuse to get out! Priceless! 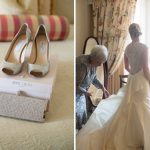 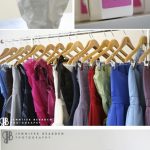 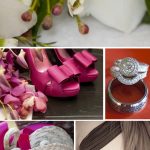 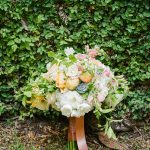