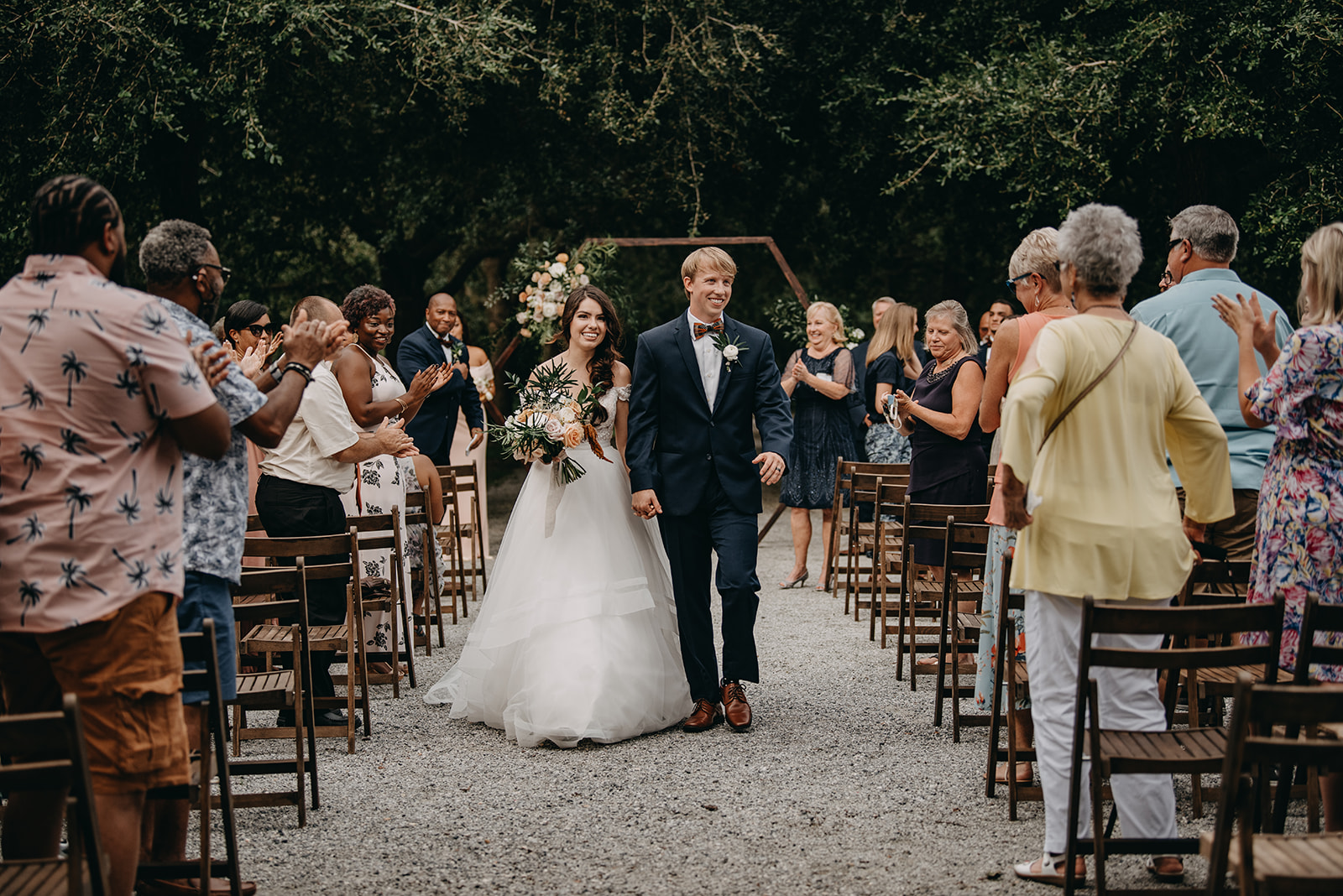 It might as well have been written into a movie script: Boy meets girl while waiting on a bus. They wind up sitting together. Struck by her beauty, he nervously strikes up a conversation, which eventually leads to a casual lunch, then dinner, and eventually marriage. Thus is the love story of Marissa and Josh, only it was while attending the University of South Carolina in Columbia, and five loving years that passed between the meeting and that bended knee moment.

Botany Bay in Edisto was the backdrop for the proposal, which came as a complete surprise for Marissa. He was out of town—or so she thought—when she took a stroll on the beach with her sister and came upon “Marry Me” spelled out in seashells on the shore. “I turned to my sister and gushed how cute that someone must have proposed earlier,” Marissa recalls. Moments later, Josh reveals himself from hiding, and the rest, as they say, is history. 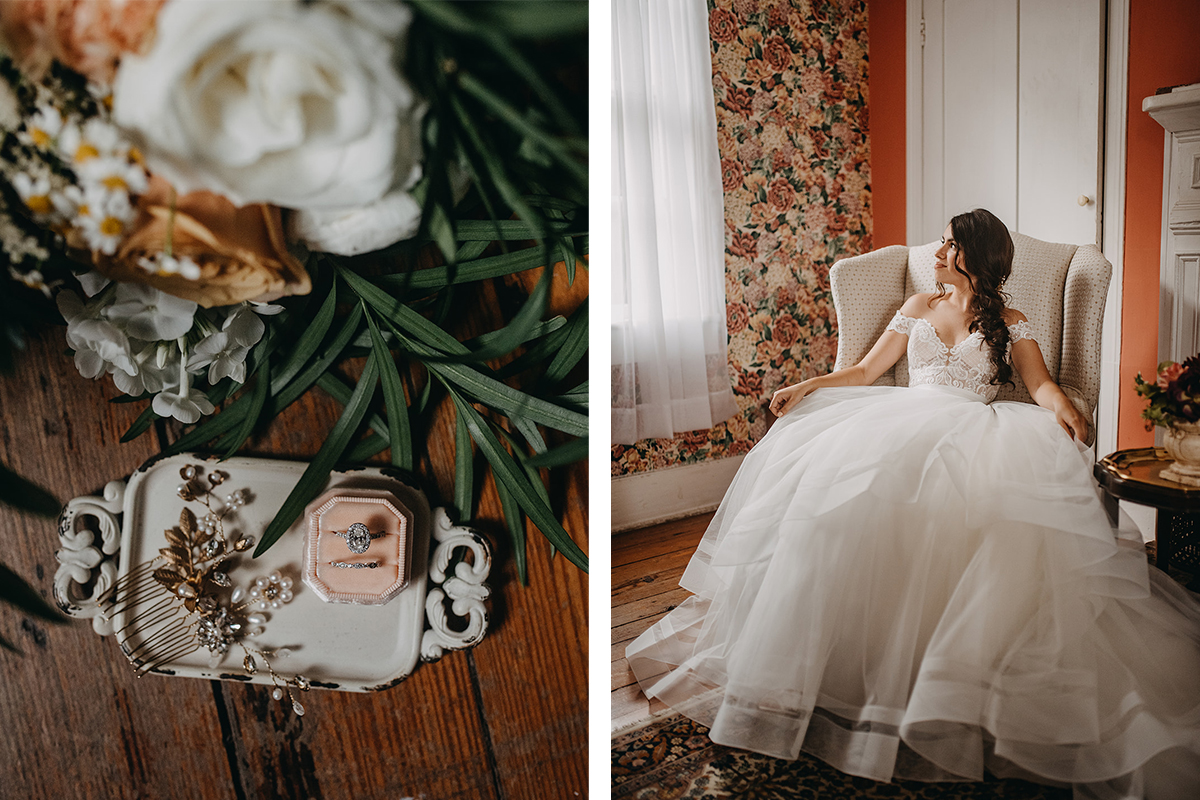 Josh was living in Charleston, as was Marissa’s family, so the decision to marry in the Holy City was easy. The idea of a garden dinner party, held with lots of greenery under a string-lit patio, served as the décor inspiration. Marissa did most of the planning, and called on Nicki Paige Collection for extra coordination leading up to their August 1, 2020 wedding at Old Wide Awake Plantation, where she donned a gorgeous two-piece gown from Veritá Bridal.

Terra-cotta—a color Marissa admits she became obsessed with during her 20 months of wedding planning—and pops of peach were infused throughout. It was even woven into the trio of buttercream-frosted and gold-flaked cakes designed by Cakes by Kait. “I loved the layered look as opposed to one larger tiered cake,” says Marissa.

Another intentional design detail was the hexagon shape, which came through in the ceremony arbor provided by Sawdust and Sweetgrass and in the name tags. Following the honeycomb thread, guests were gifted jars of local honey, displayed next to a Polaroid camera and guestbook, which guests were encouraged to snap away and leave their photos and notes.

The days surrounding the wedding were filled with Southern and Lowcountry cuisine, from barbecue at the rehearsal dinner, shrimp and grits and other savory fare for the wedding, and a big Lowcountry boil the day after. A gelato cart kept guests cool between events, and the Chug-a-Lug Wagon mobile bar proved an adorable hit as well. Indeed, the good times were a rolling! 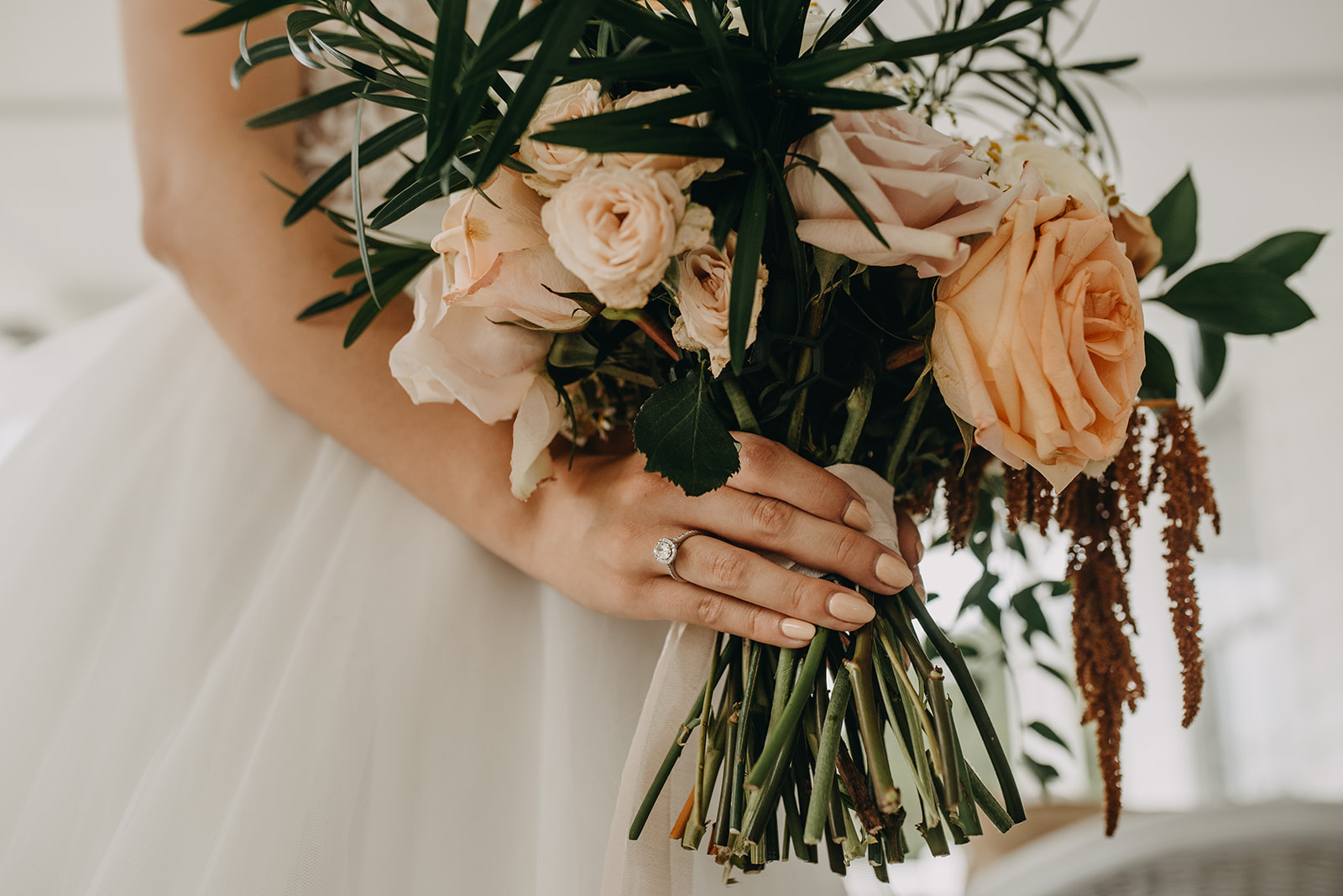 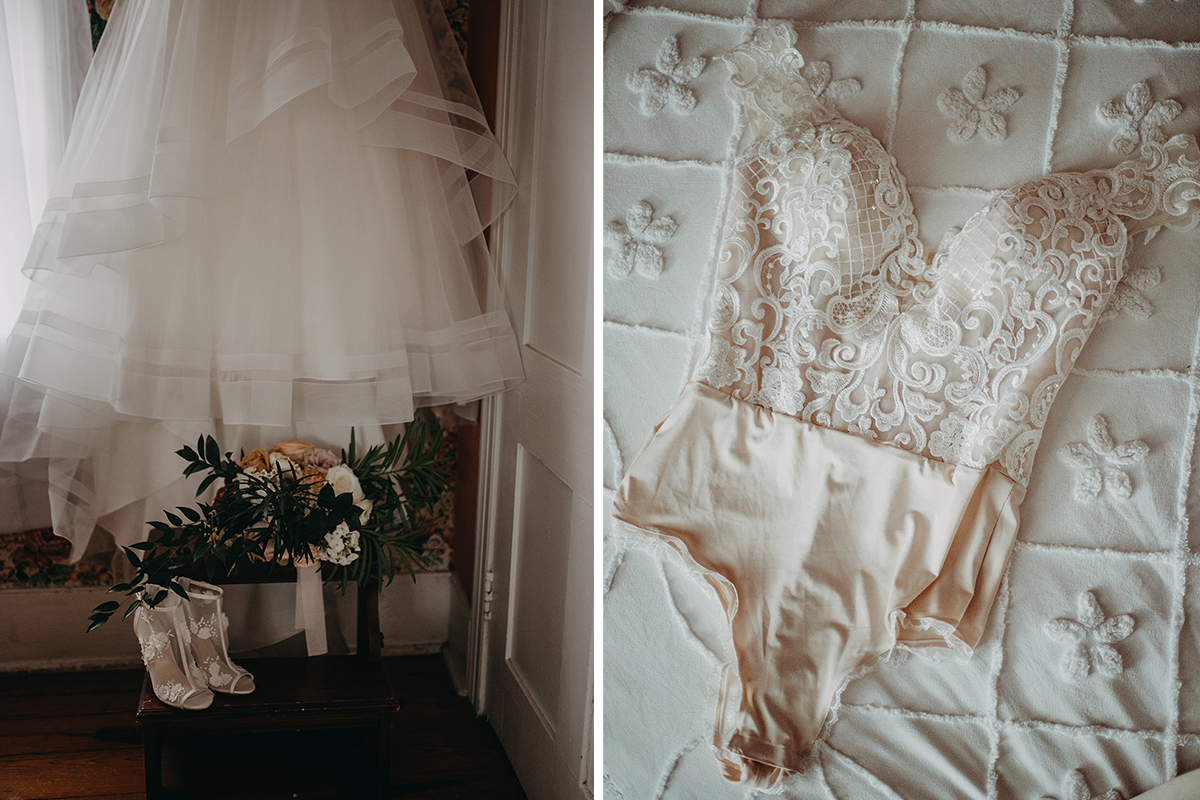 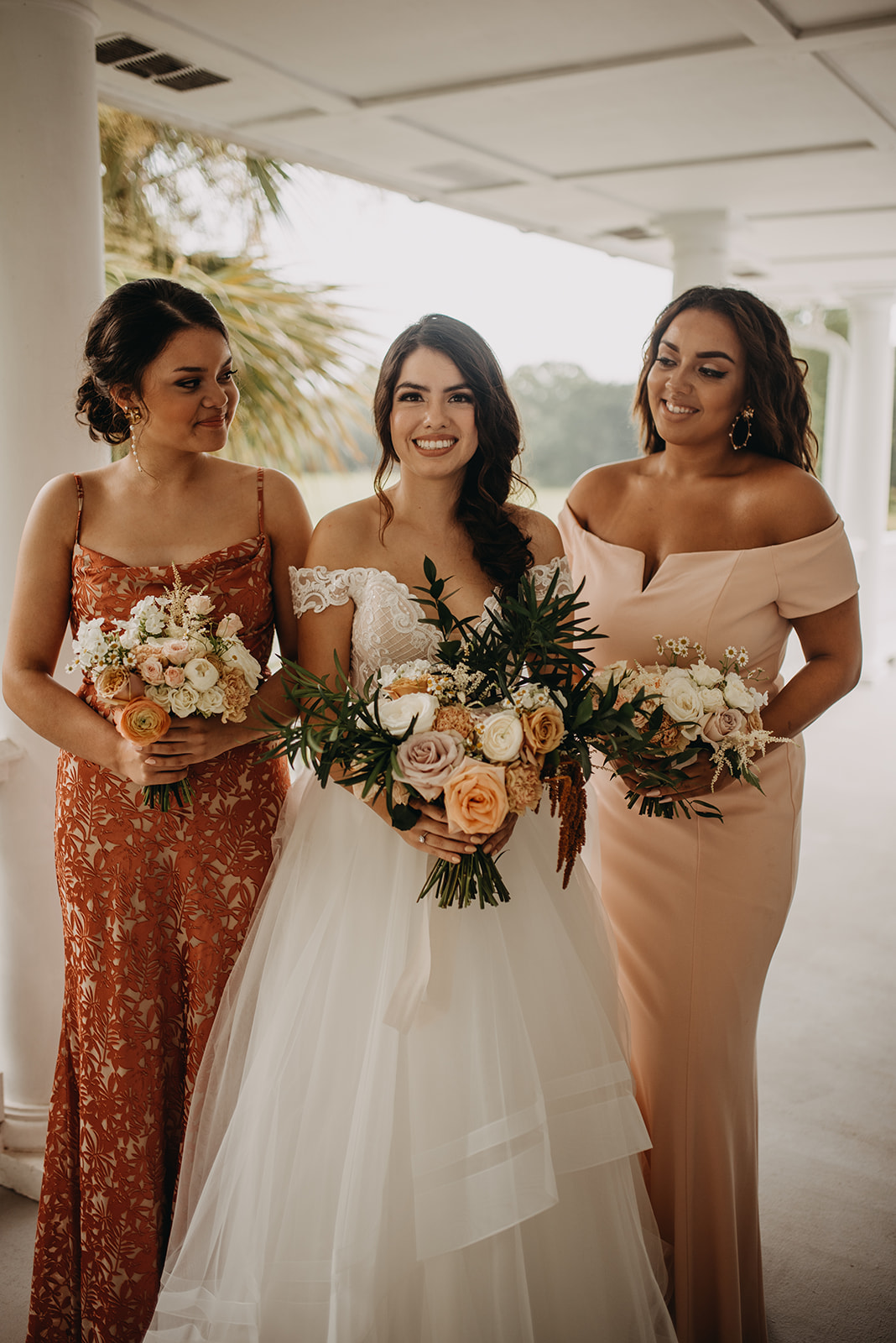 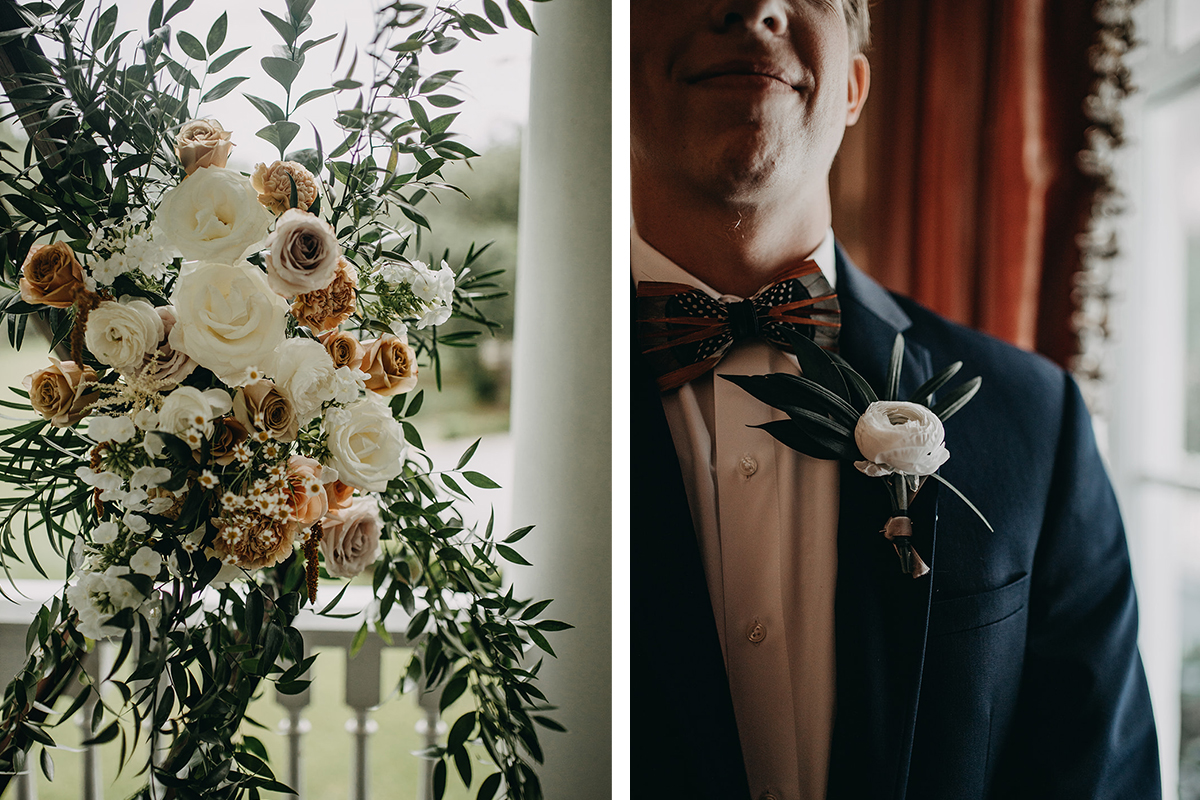 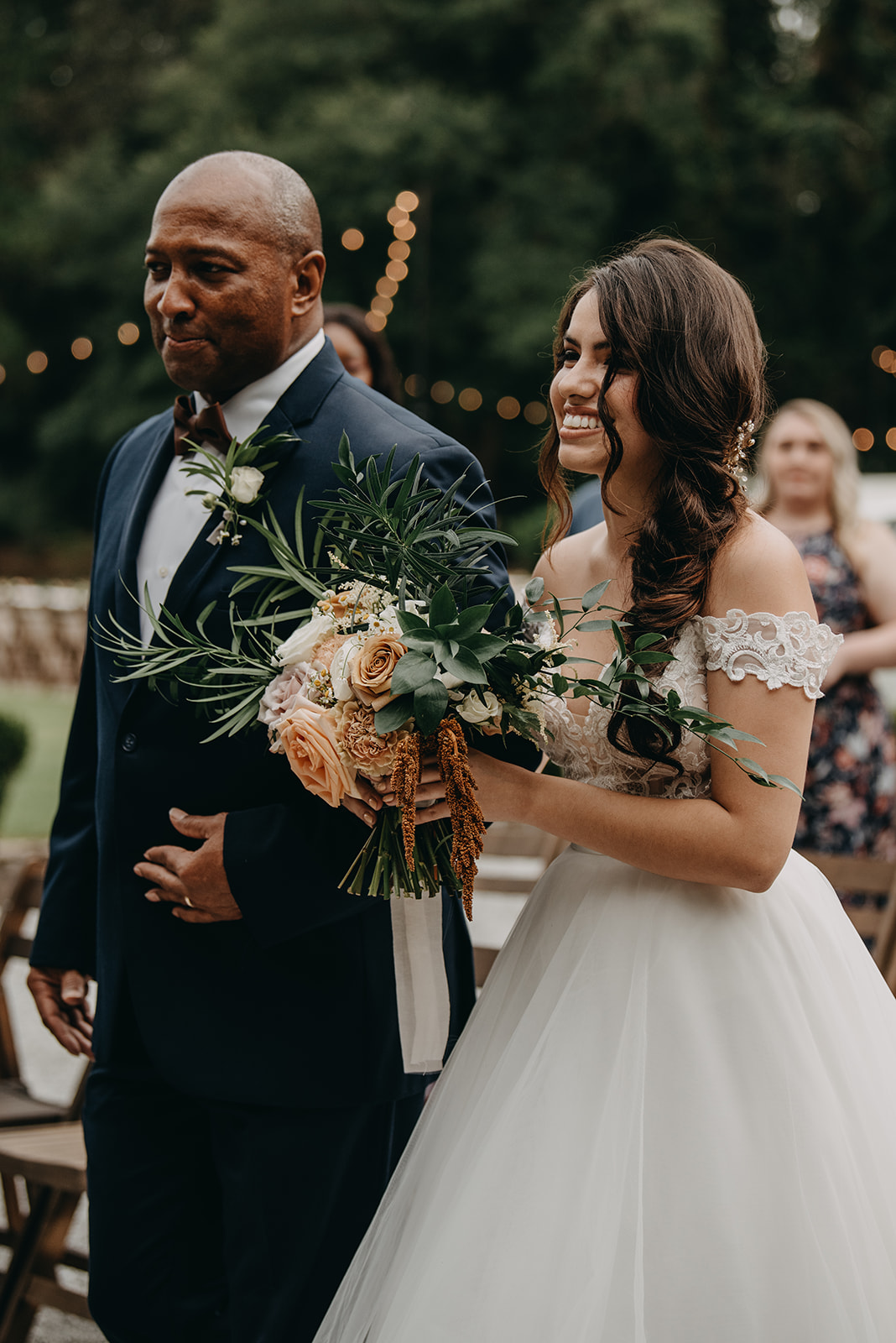 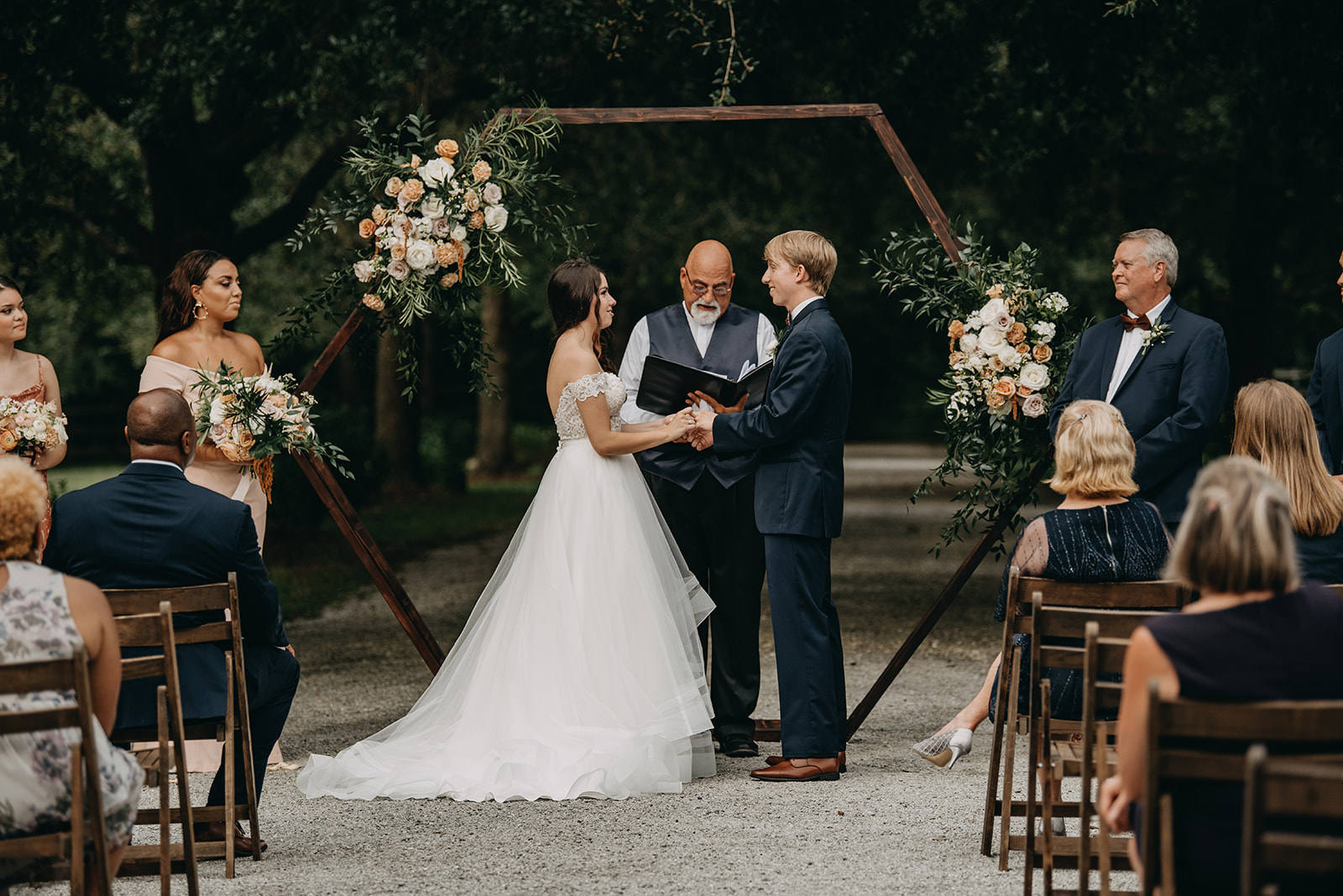 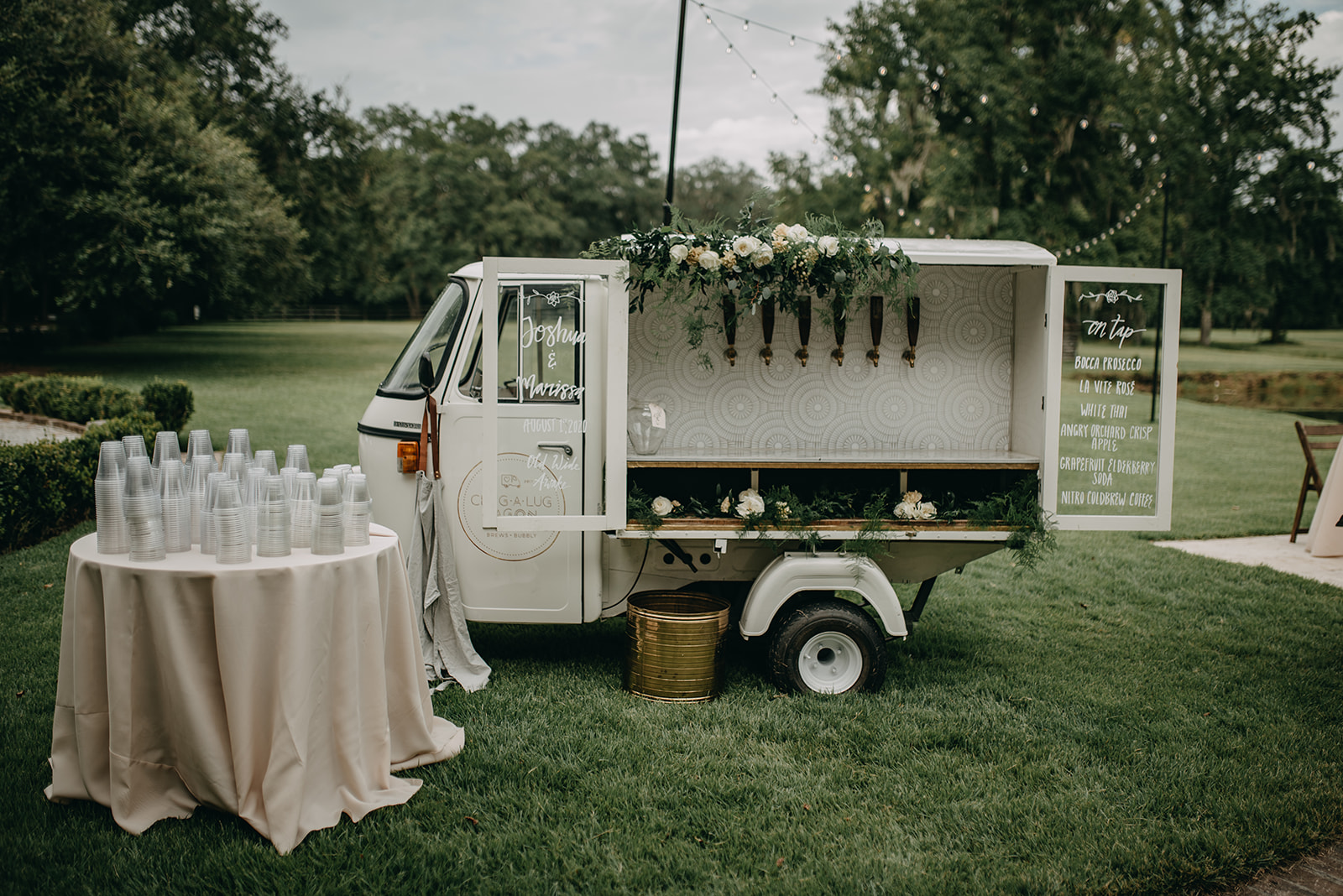 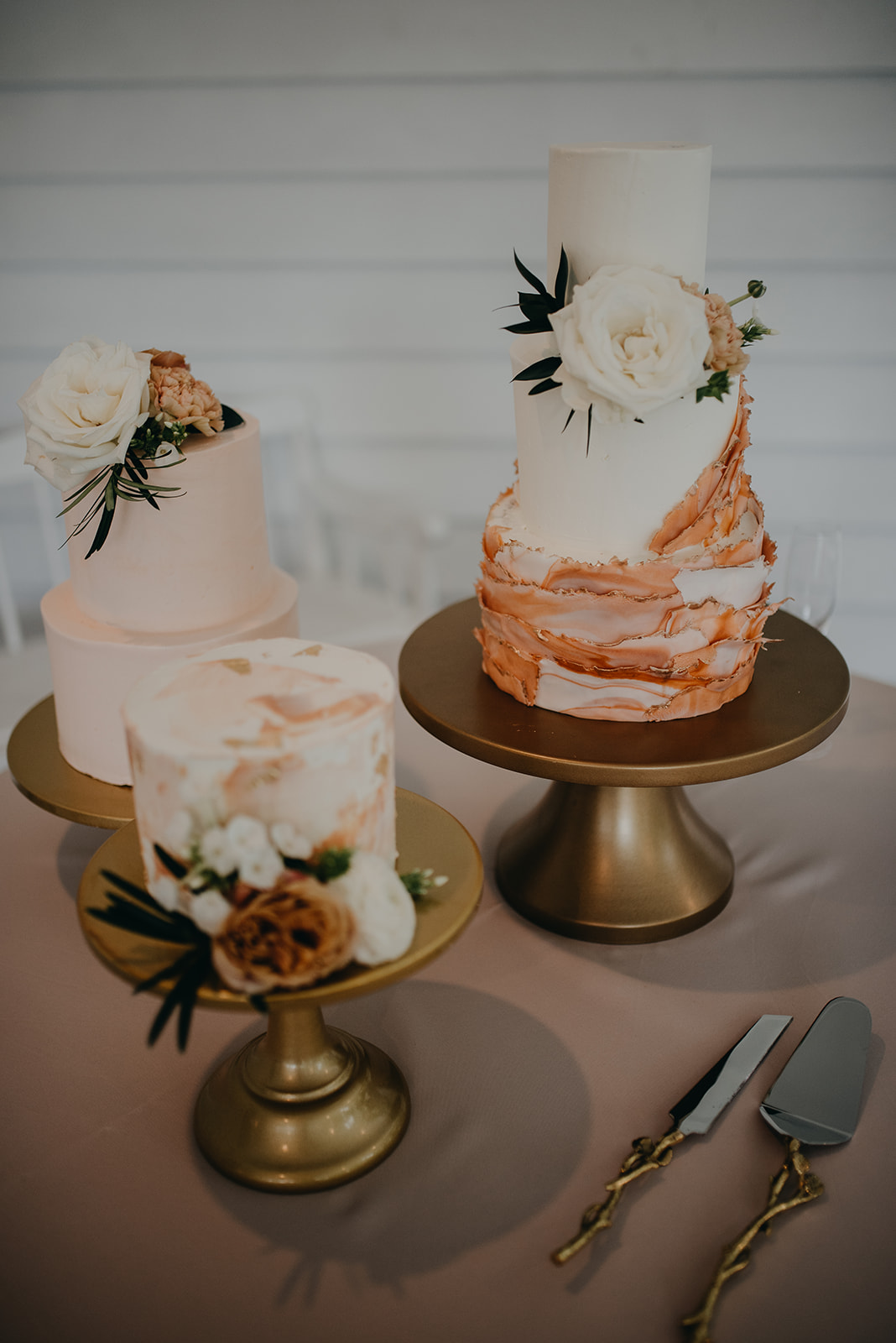 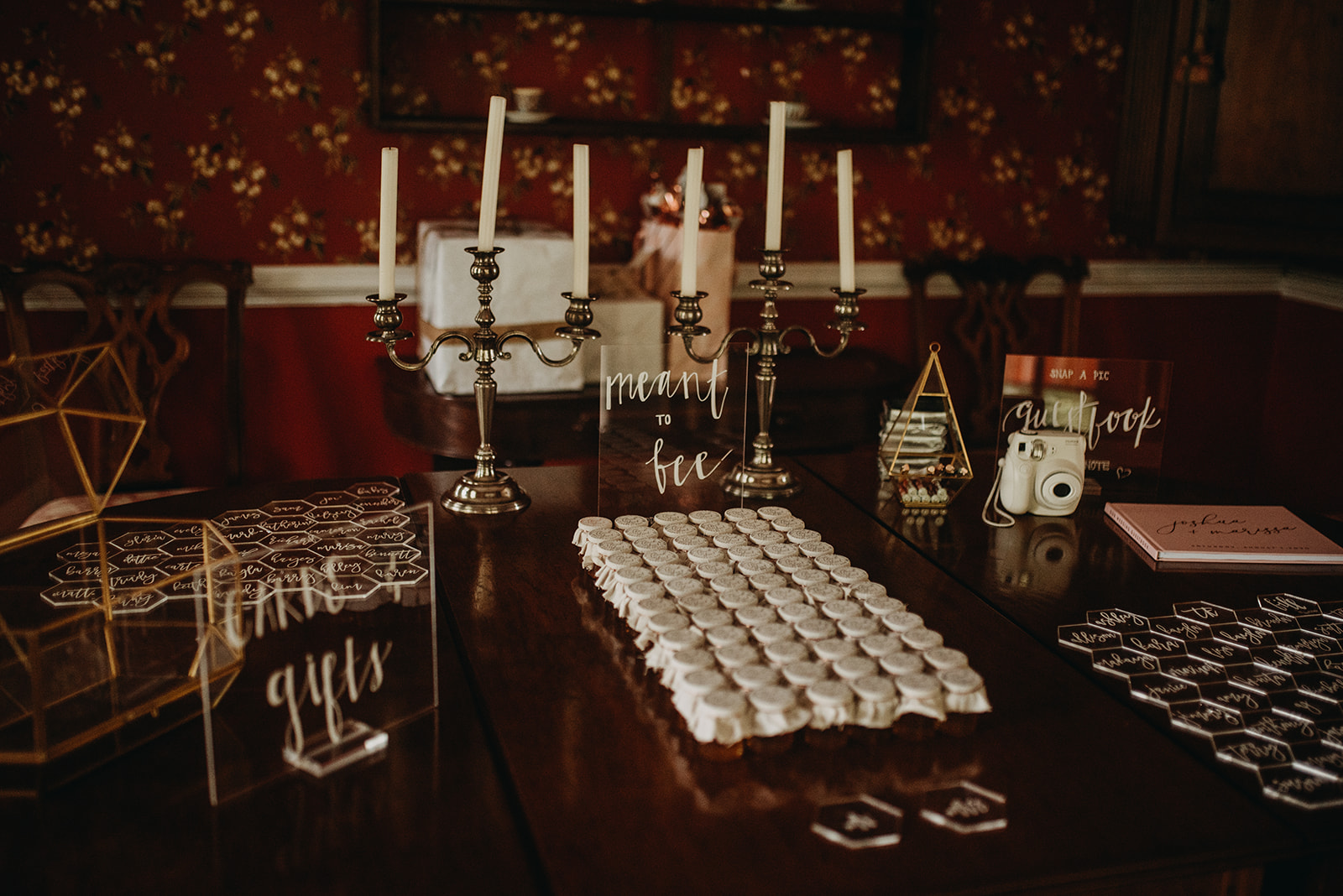 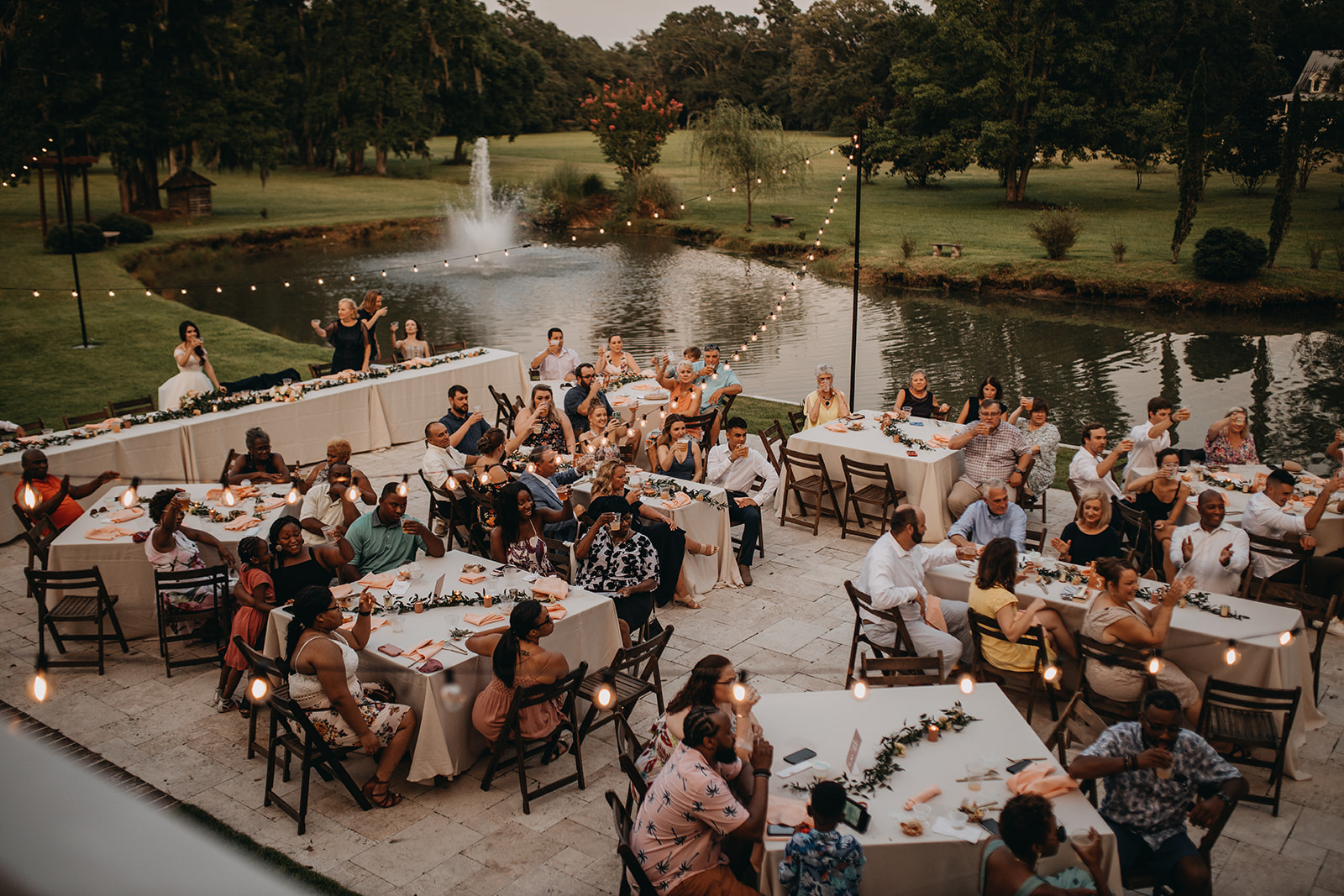 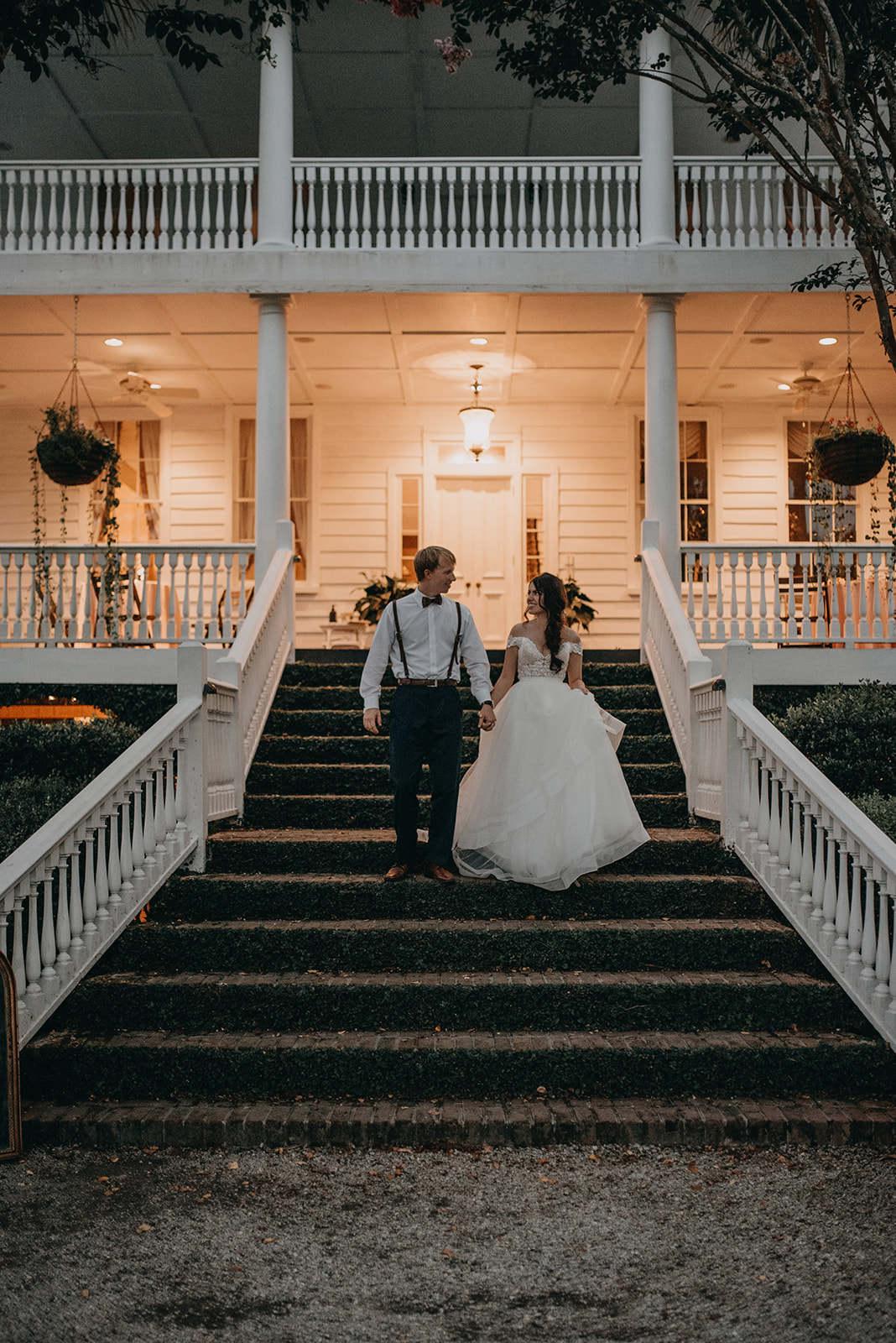