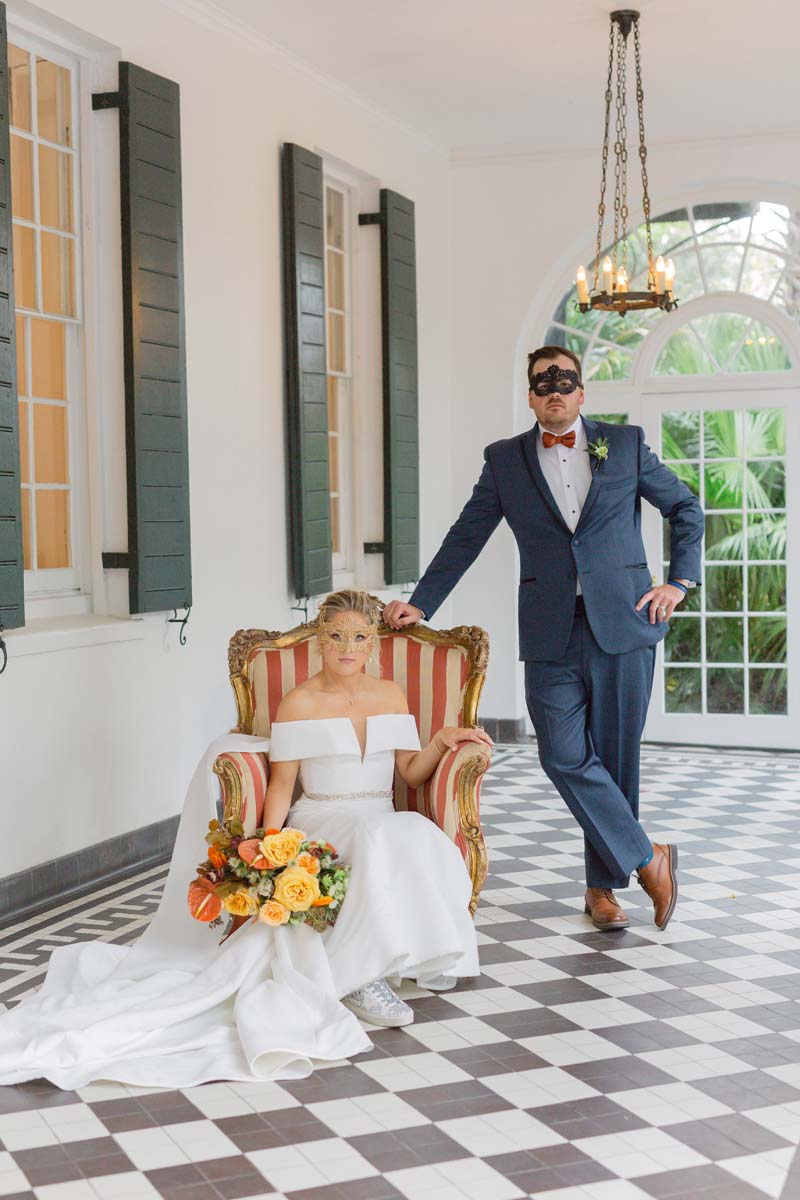 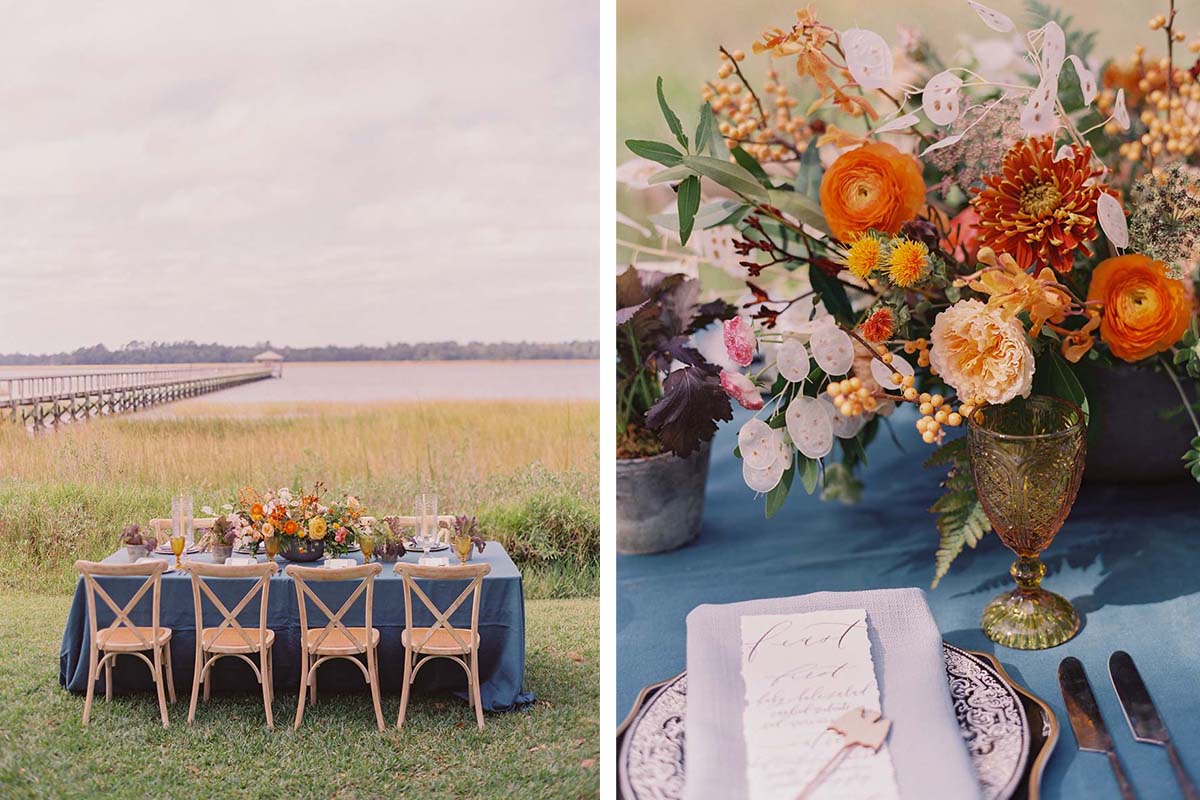 You could say it was for the love of Charleston that brought them together. As coworkers in Washington, DC, homesick South Carolinian Madison Clark overheard her Ohio-born coworker Brian Ruther complaining that he had to travel to Charleston for work yet again. Rushing to the defense of her home state, she intervened—less than gracefully, she says—then walked away without revealing her name. Flash-forward five months to a more fruitful encounter at a party, which resulted in a first date, and three years later, an amazingly orchestrated proposal. The surprise involved a scavenger hunt-style trip to Charleston and the elated embrace of close family who got to share in the celebration.

Given their origin story, it’s no surprise the sweethearts chose to start their life together in Charleston. Halloween was significant, as it marked a turning point in their relationship—a day when Brian knew Madison was “the one,” as she showed strength and peace during a major surgery stemming from years as a gymnast. The wedding at Lowndes Grove was, in fact, on the two-year anniversary of her surgery and a date neither could ever forget. 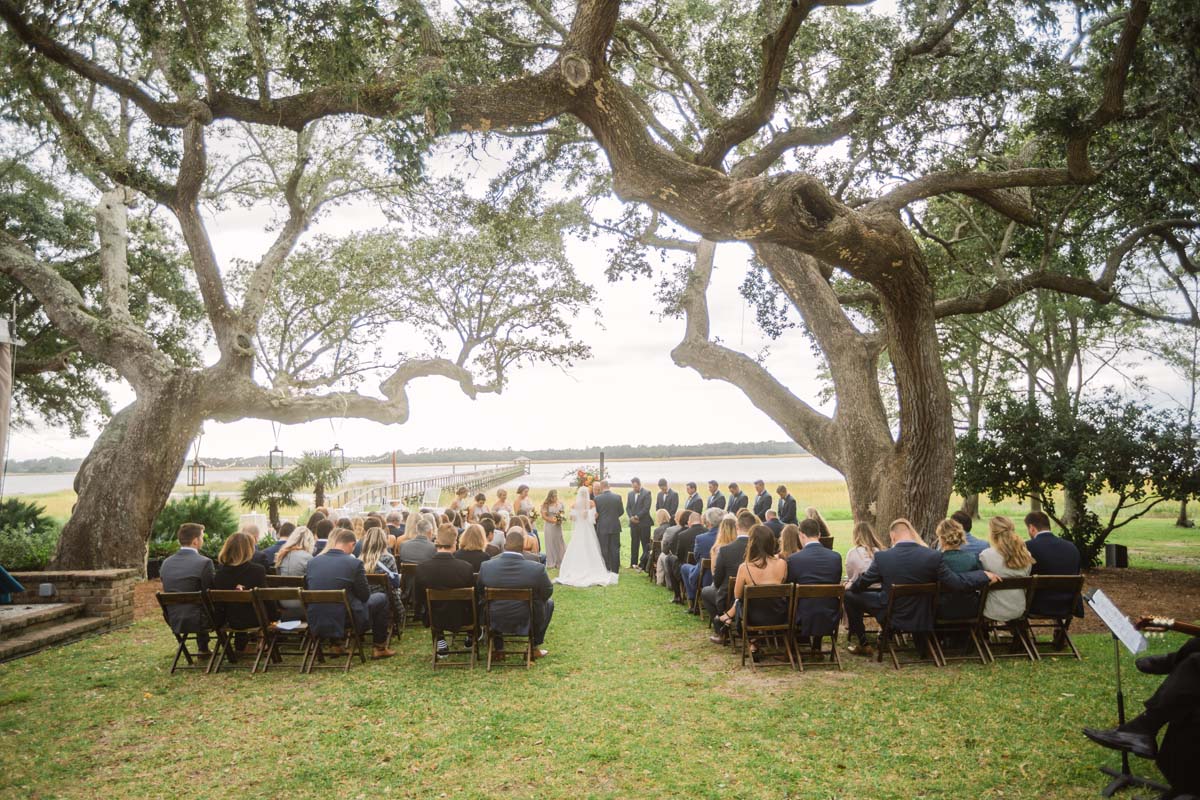 The waterfront estate offered the chance to introduce Brian’s family and friends to the beauty of the Lowcountry, and the setting didn’t disappoint. At the ceremony, under the bows of centuries-old live oaks, it was hard not to both feel the love and fall in love with the magical location. Flowers by Vero Designs brought autumnal colors into the scene. The orange and blue color palette was a salute to the couple’s alma maters: Clemson and Penn State.

While they didn’t want to take the Halloween theme too far, there were some fun nods to the holiday, including custom koozies with masked skulls and the words “’Til death do us part.” Because of COVID restrictions, passed drinks had to be covered, so planner Haley Kelly proposed wooden coaster toppers, printed with holiday-themed phrases. “We truly couldn’t have done it without Haley,” says Madison. “She gave us so many ideas to make sure we were following any restrictions,” including three separate dance floors instead of one.

“This was the first time seeing many friends and family in a year and it truly felt like the first night of normalcy in such a long time,” says Madison. “It turned out to be the best of times surrounded by so many that we love.” Being in the place that sparked their first conversation—where they now plan to raise a family—made it all the more special.                                        —Joanne O’Sullivan 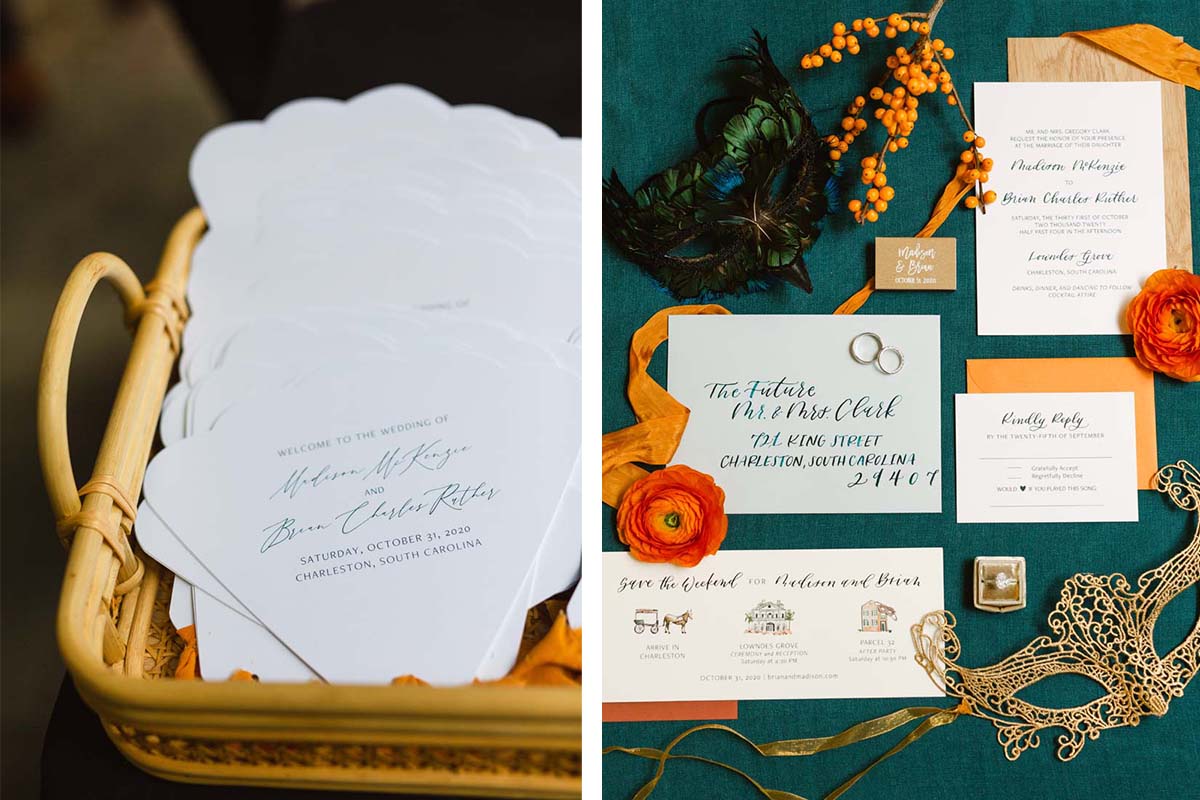 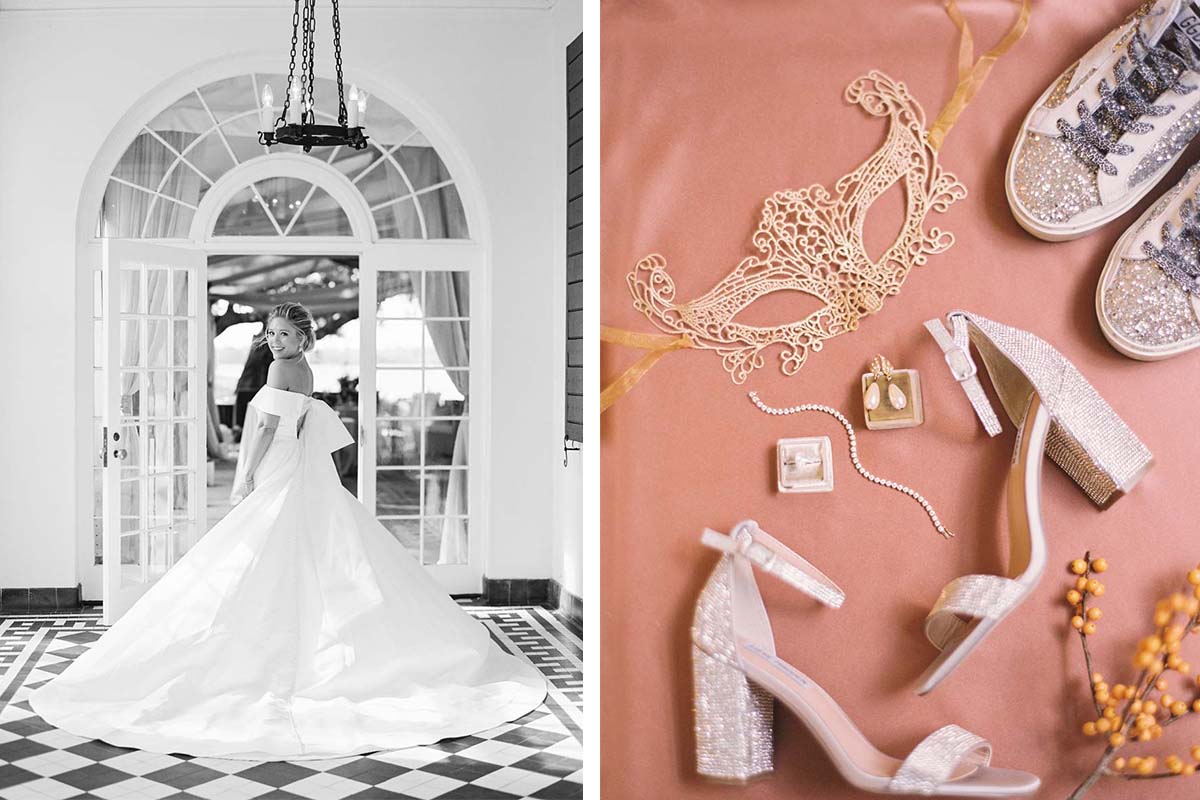 The couple wanted to acknowledge the holiday celebration associated with their wedding day without going over the top. For their couples portraits, dramatic costume ball masks were part of the photo shoot. 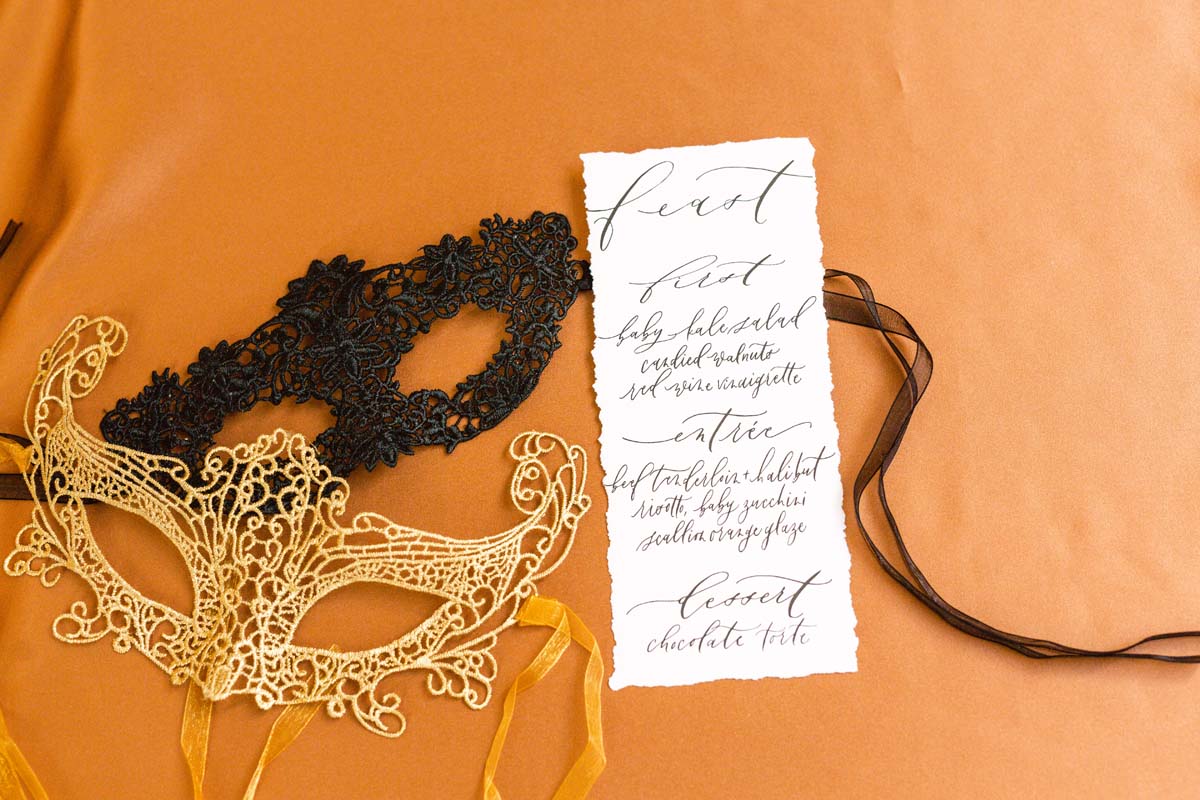 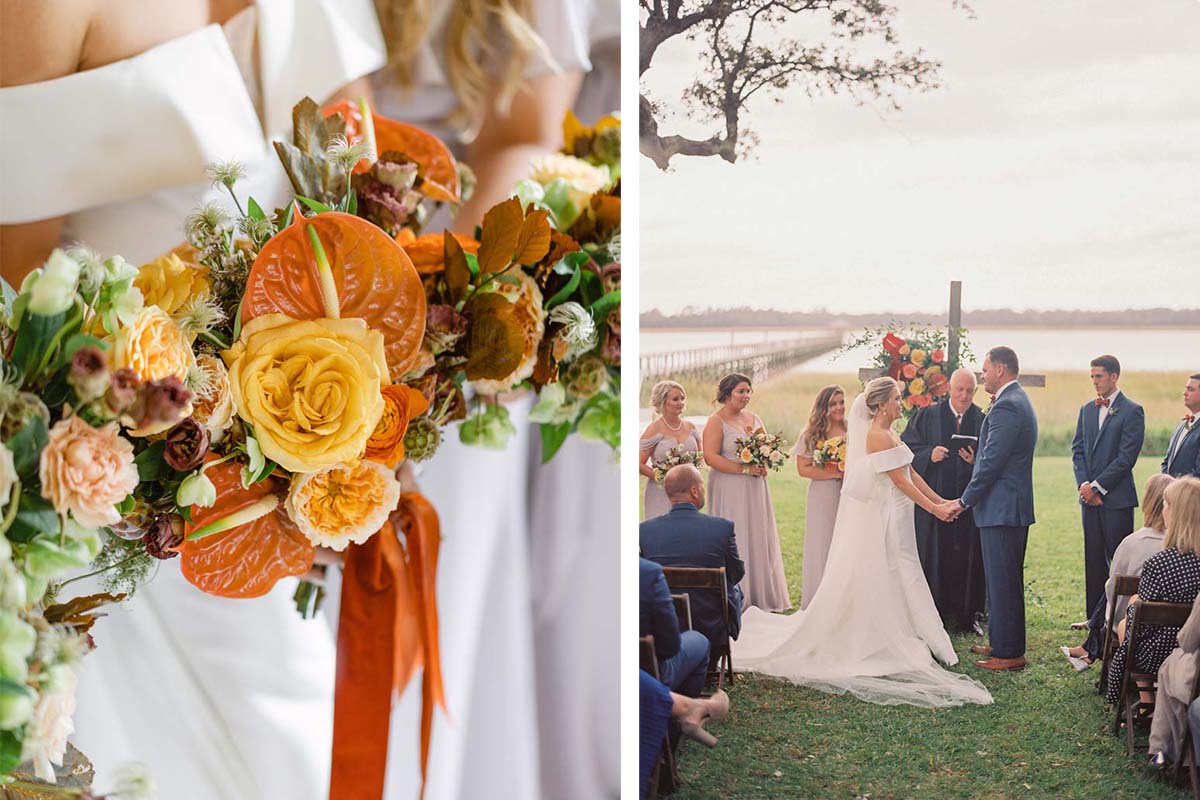 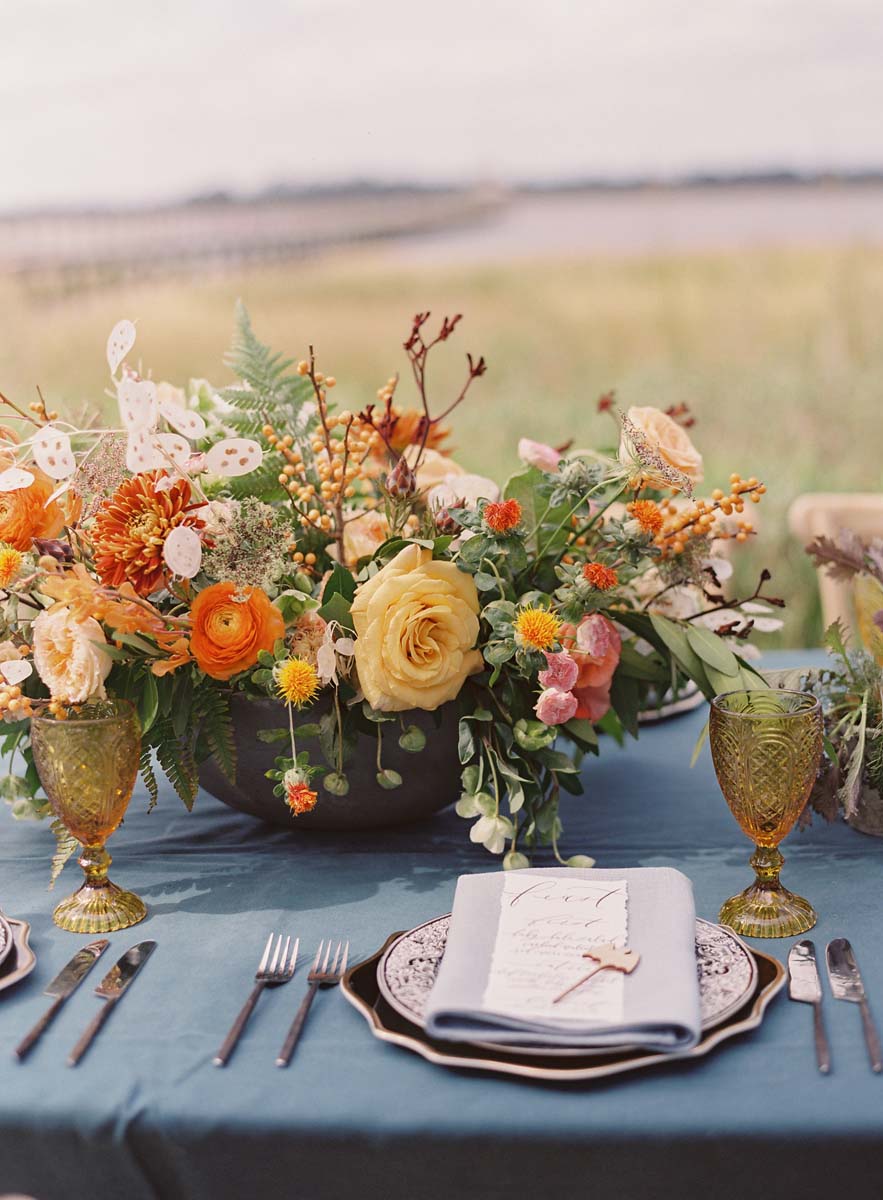 The bride supplied bridesmaids with distinctive Halloween earrings from BaubleBar to wear at the reception, lending a playful element to the festivities. At the reception, passed drinks were topped with wooden coasters engraved with Halloween-themed saings like “Here for the Boos,” Let’s give them pumpkin to talk about,” and “Love Potion.” 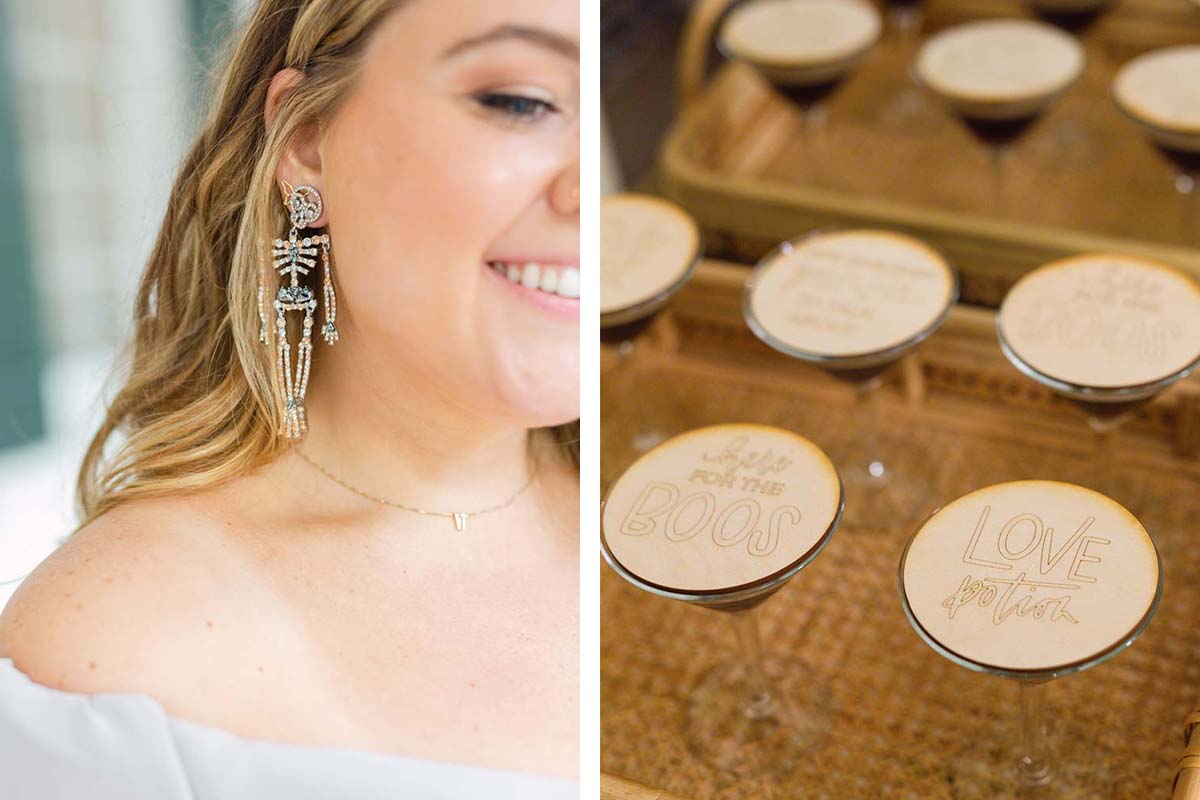 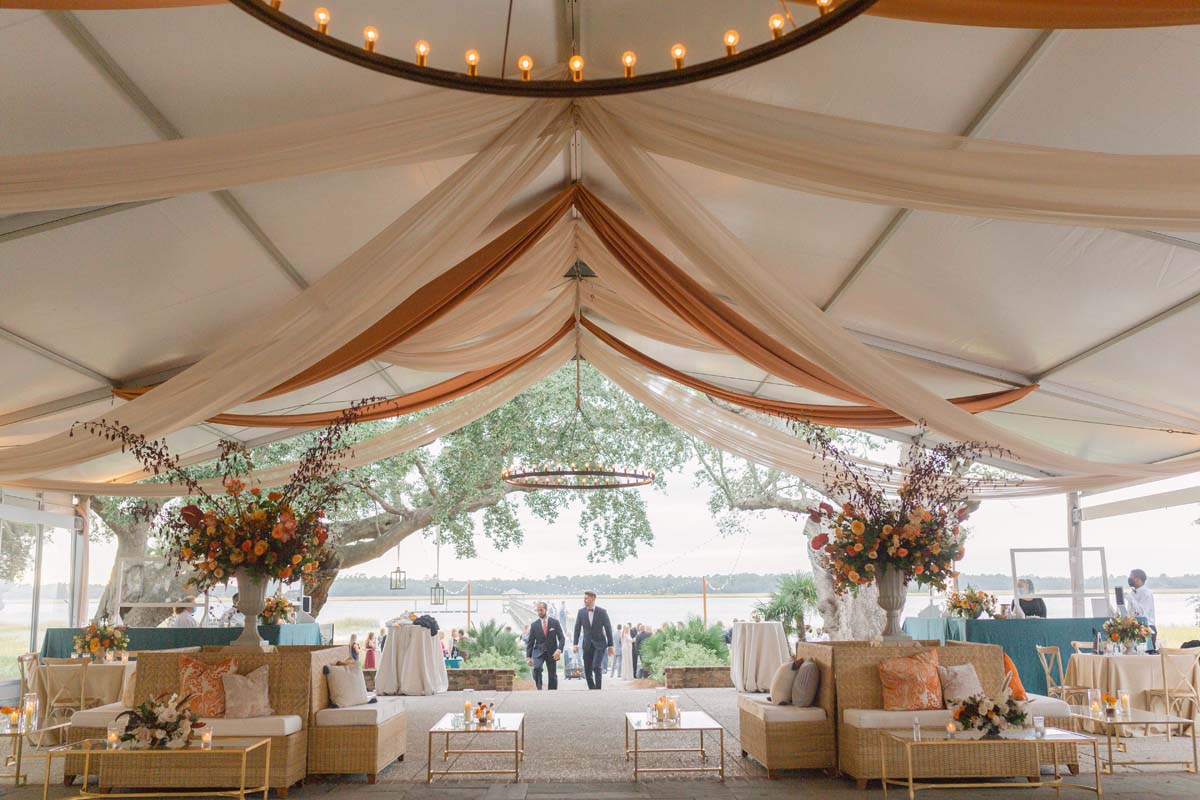 Chic woven furniture aligned with the reception mood, described by Madison as rustic with a coastal influence. Cinnamon-hued accents and tent swags brought a seasonal touch to the reception area. The blue accents were a nod to Brian’s alma mater, Penn State. Vibrant orange florals by Vero Designs honored not only the Halloween Holiday but Madison’s college, Clemson. 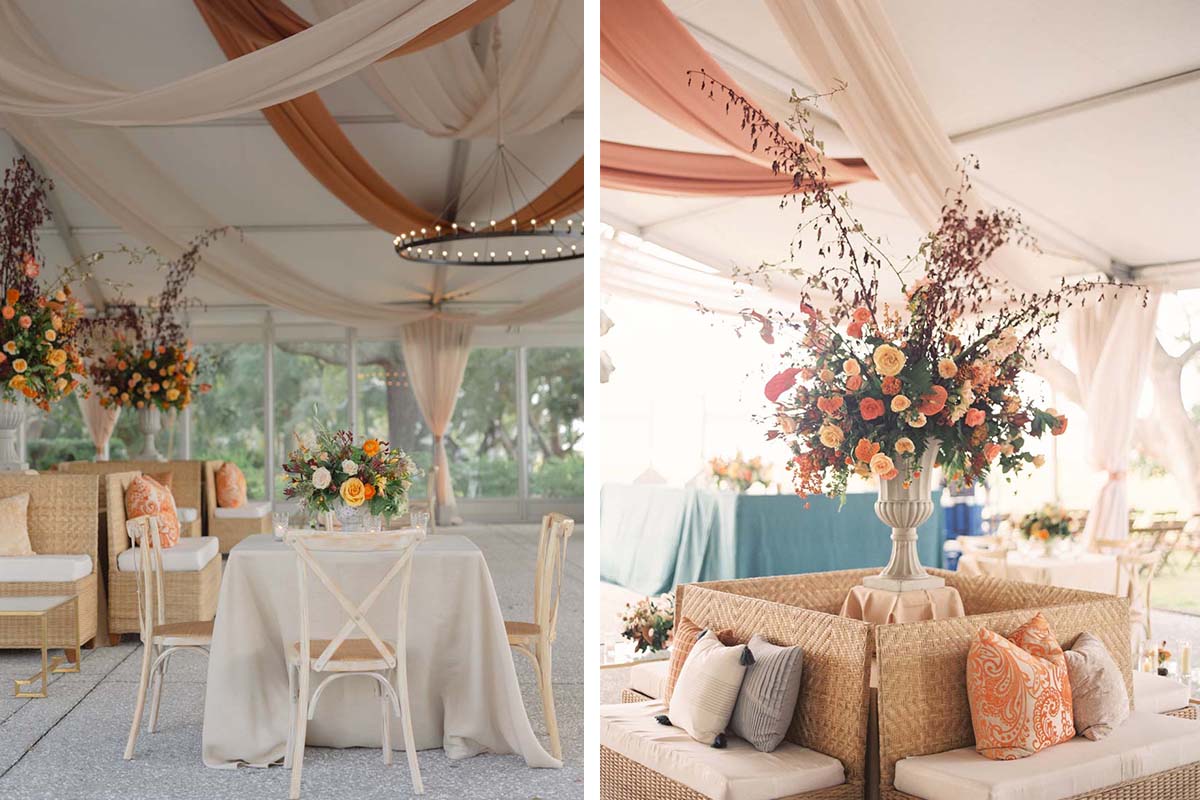 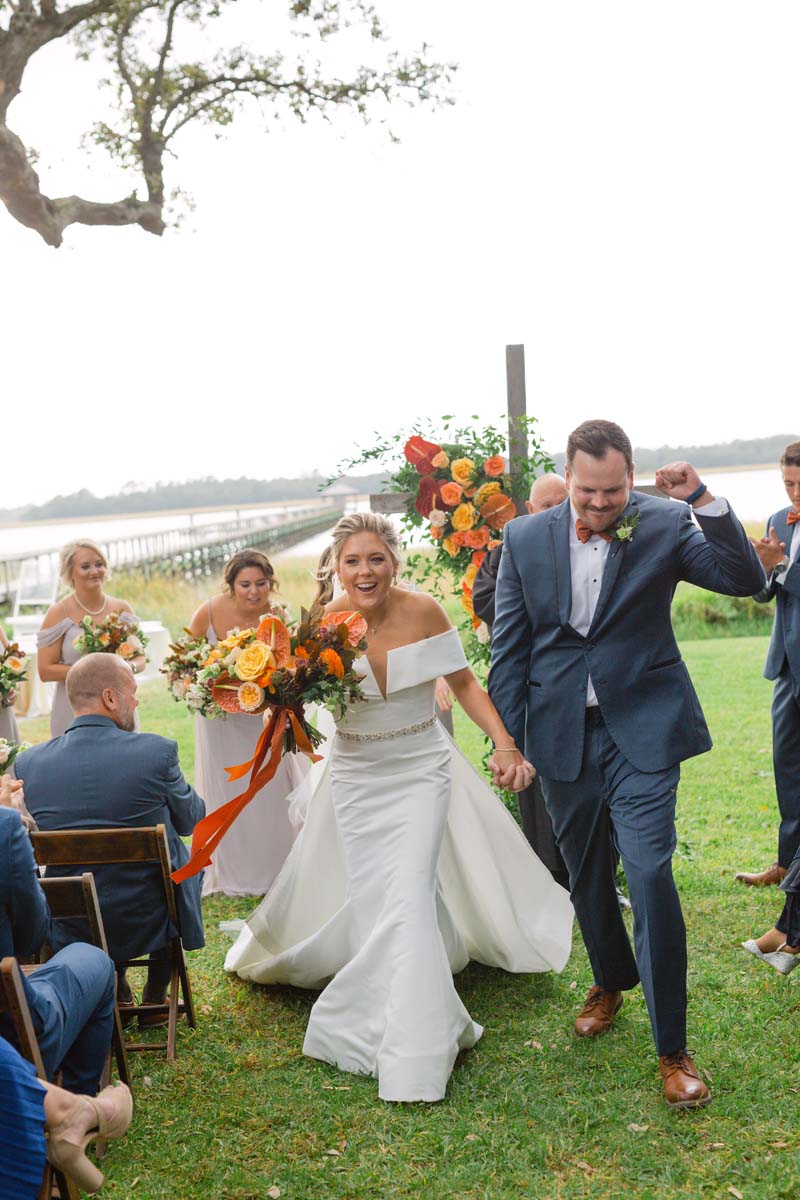 For her father and mother-in-law, Madison had handkerchiefs embroidered for them with personal messages along with their wedding date. 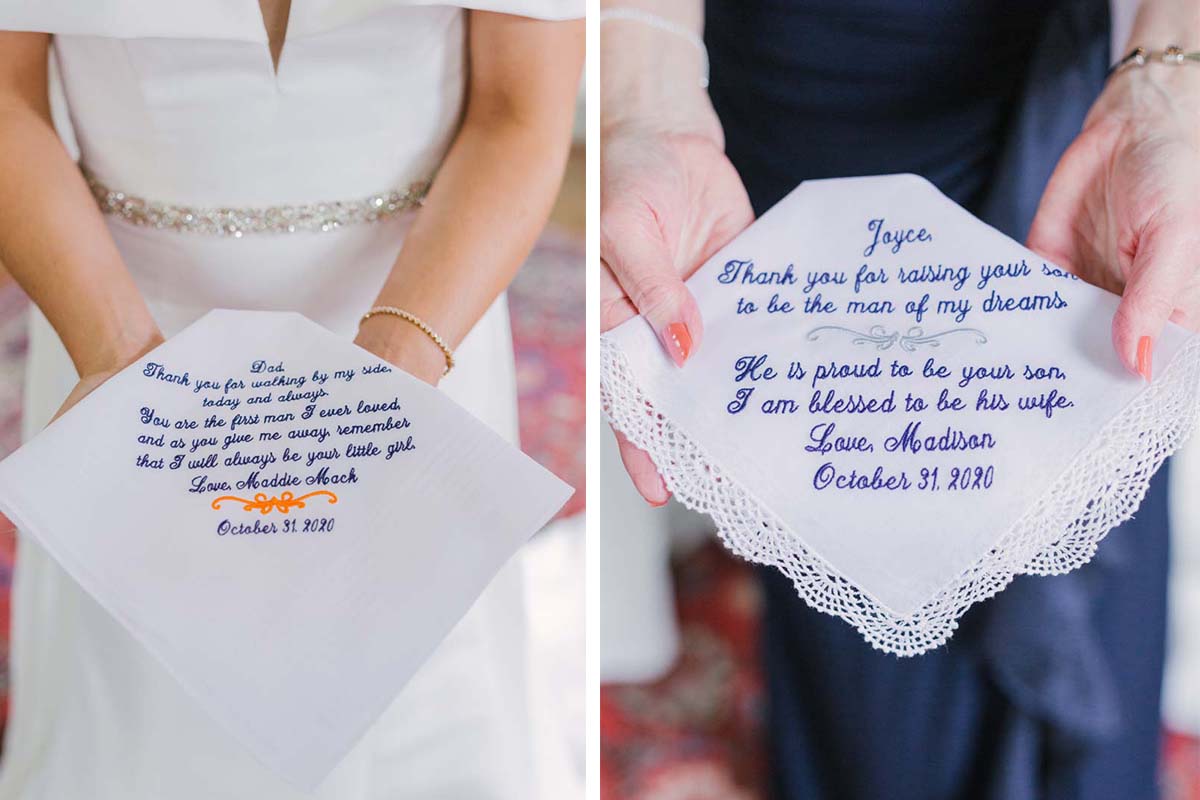 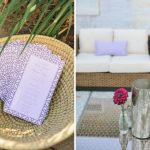 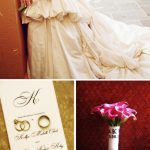 Kellyn and Matt {The Mills House}
By weddingseditor October 28, 2011 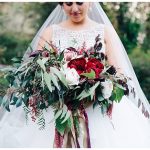 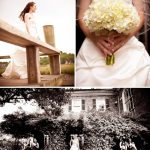 Christina & Matt {Boone Hall Plantation}
By weddingseditor September 17, 2012
Welcome to The Wedding Row… Charleston’s ultimate resource for the most elegant and innovative weddings, along with all the posh details.